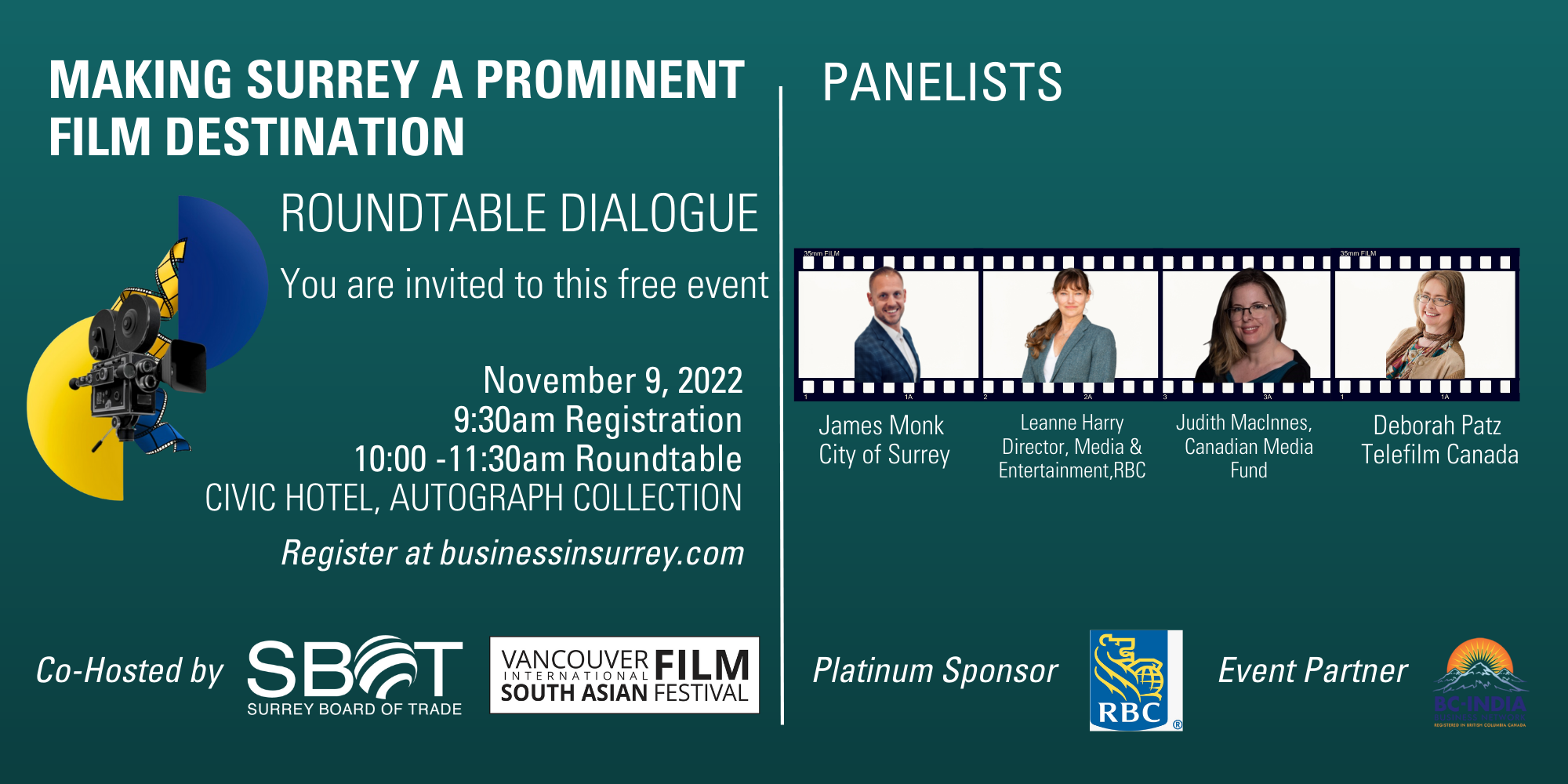 Surrey's film presence has been felt the world-over because of critically acclaimed films such as Deadpool, Elysium, Honsla Rakh, and many others. Join the Surrey Board of Trade and the Vancouver International South Asian Film Festival in a roundtable to understand Surrey's current film assets, how we can leverage those assets to create greater opportunities, and foster connections to grow your business.

James Monk: is the City of Surrey's Film Manager. He has been working as the Film Manager for 6 years and is responsible for assessing individual film company requirements; receiving and processing filming permits based on the City?s filming guidelines and fees; mitigating filming impacts on the community; preparing and maintaining reports and statistics; preparing invoices; and coordinating services with departments.

Leanne Harry: As a Director on the largest team of specialized account managers across Canada, Leanne provides expertise focused on the complex business of film and television production financing.  She has a broad understanding of the business, production issues, and deal timelines and works with our Media & Entertainment clients every step of the way through our extensive network of industry service providers, including entertainment lawyers, accountants, bonders, and GAP financiers.

With over 25 years of experience with RBC, Leanne enjoys the opportunity to provide access to the full capability of RBC Financial Group and draws on a team of specialists in product, risk, and service that are dedicated to the Media and Entertainment sector to the benefit of her clients.  Media and Entertainment is a very important and valued business group to RBC Royal Bank and we are proud to support this important sector.

Judith MacInnes: (she/her) is a Development Analyst on the CMF Program Administration team at Telefilm Canada in the Vancouver office. With over 25 years of industry experience, her roles have varied and have covered the production process from early-stage development, pre-production, production, to post and final delivery, marketing, and distribution. She has a genuine passion for supporting producers, content creators, and executives by demystifying the administrative side of storytelling.

Deborah Patz: (she/her) is an Investment Analyst for feature film on the Business Affairs team at Telefilm Canada in the Vancouver office. Her 22 years of experience at Telefilm in all sectors (feature film, TV, digital media), and prior experience in production since the mid-80s gives her a depth of knowledge on finance and production at all budget levels. She is a keen and approachable behind-the-scenes supporter of Canadian storytellers telling their stories for Canada and the world.
November 9, 2022 - Making Surrey a Pr...
Register